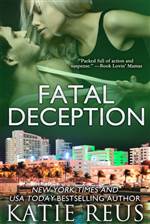 Mara Caldwell is a woman with a dark past. She made a clean break from her old life, never imagining her secrets could come back to haunt her. When an old enemy surfaces and threatens the world she’s created for herself Mara is prepared to give up everything, including the husband she loves if it will keep him safe.

Harrison knew his wife had secrets when he married her, but when he discovers the truth, it’s far worse than he imagined. He's determined to protect her from a deadly enemy who wants to destroy her, but her lack of faith in him infuriates and wounds him. They must work together to keep her safe, but the man they're up against seeks to destroy everything they've built together. Including their lives.