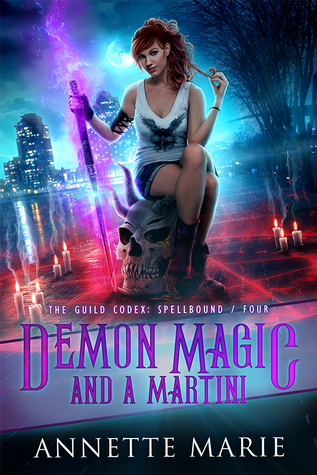 Demon Magic and a Martini

When I first landed a bartending job at the local guild, I didn't know a thing about magic. These days, I'm practically an expert on the different magical classes, but there's one nobody ever talks about: Demonica.

Turns out they have a good reason for that.

My guild is strictly hellion-free, but some people will risk life and soul to control the biggest bullies on the mythic playground. And now a demon has been loosed in the city.

My three best friends are determined to slay it, but even badass combat mages are critically out-magicked. And that's not all. The monster they're tracking--it's not hiding. It's not fleeing. It's not leaving a trail of corpses everywhere it goes.

The demon is hunting too. And in a city full of mythics, it's searching for deadlier prey.

If we can't unravel the demon's sinister motivations, more innocent people will die, but finding the answers means digging into dark secrets ... and learning truths I never wanted to know.

--
Note: The three mages are definitely sexy, but this series isn't a reverse harem. It's 100% fun, sassy, fast-paced urban fantasy.