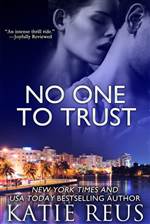 No One to Trust

No One to Trust (Red Stone Security #1)

Computer security specialist Elizabeth Martinez has never been able to turn her back on her brother Benny. When his risky lifestyle finally lands him in harm’s way, Elizabeth finds herself dragged into the dangerous underworld with him and into the cross hairs of one of Miami’s death-dealing drug lords. Only after her ex-boyfriend saves her does she realize she might have no choice but to depend on the one man she has tried so desperately to forget.

Former Marine Porter Caldwell never should have let Elizabeth walk away from him all those months ago. She means more to him than anything and now that she’s in danger and turned to him for help, he won’t make that mistake again. When a local gang targets her and she’s nearly killed in a drive by shooting, Porter vows to do whatever it takes to keep her alive. Even if it means turning his back on all that he’s sworn to uphold.