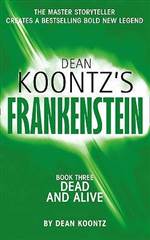 From the celebrated imagination of Dean Koontz comes a powerful reworking of one of the classic stories of all time. If you think you know the story, you know only half the truth. Get ready for the mystery, the myth, the terror, and the magic of…

A devastating hurricane approaches New Orleans and Victor Helios, once known was Frankenstein, has unleashed his benighted creatures onto the streets. As New Orleans descends into chaos, his engineered killers spin out of control, and the only hope rests with Victor's first and failed attempt to build the perfect human, whose damned path has led him to the ultimate confrontation with his pitiless creator. But first, Deucalion must destroy a monstrosity not even Victor's malignant mind could have imagined - an indestructible entity that steps out of humankind's collective nightmare with one purpose: to replace us.