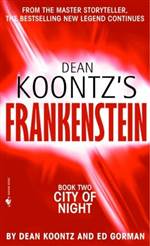 From the celebrated imagination of Dean Koontz comes a powerful reworking of one of the classic stories of all time. If you think you know the legend, you know only half the truth. Here is the mystery, the myth, the terror, and the magic of…

They are stronger, heal better, and think faster than any humans ever created–and they must be destroyed. But not even Victor Helios–once Frankenstein–can stop the engineered killers he’s set loose on a reign of terror through modern-day New Orleans. Now the only hope rests in a one-time “monster” and his all-too-human partners, Detectives Carson O’Connor and Michael Maddison. Deucalion’s centuries-old history began as Victor’s first and failed attempt to build the perfect human–and it is fated to end in the ultimate confrontation between a damned creature and his mad creator. But first Deucalion must destroy a monstrosity not even Victor’s malignant mind could have imagined–an indestructible entity that steps out of humankind’s collective nightmare with one purpose: to replace us.