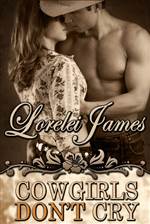 Good girls can play rough too...

Jessie McKay has accepted her marriage to Luke McKay wasn't perfect. After two years of widowhood, she's ready to kick up her bootheels-until Luke's younger brother shows up to spoil her fun. But if Brandt thinks she'll ever take orders from another McKay male, he's got manure for brains.

Brandt McKay has avoided his sweet, sexy sister-in-law ever since the night he confessed his feelings for her weren't the brotherly type. Unexpectedly faced with proof of Luke's infidelity, Brandt is forced to ask for Jessie's help in taking care of Luke's young son. Jessie agrees on one condition-she wants Brandt's boots exclusively under her bed for the duration.

The sexual heat that's always simmered between them ignites. Brandt is determined to make the temporary situation permanent, proving to Jessie he's a one-woman man. And Jessie is shaken by feelings she's sworn never to have again for any man...especially not a McKay.Warning: Contains branding-iron-hot sex, the one McKay on earth who wants to be tamed, and a woman who's decided tame is for nice girls who finish last.