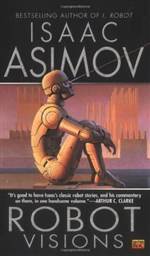 From Isaac Asimov, the writer whose name is synonymous with robots and the science of robotics, here are five decades of robot visions--thirty-four landmark stories and essays, including three rare tales--gathered together in one volume.

Meet all of Asimov's most famous creations: Robbie, the very first robot that his imagination brought to life; Susan Calvin, the original robot psychologist; Stephen Byerley, the humanoid robot; and the famous human-robot detective team of Lije Baley and R. Daneel Olivaw, who have appeared in such bestselling novesl as The Robots of Dawn and Robots and Empire.

Let the master himself guide you through the key moments in the fictional history of robot-human relations--from the most primitive computers and movile machines to the first robot to become a man. (Description from back cover)