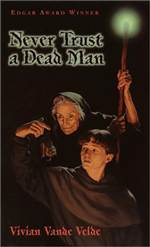 Selwyn is brokenhearted when the beautiful Anora chooses to marry the awful-but-rich Farold. It’s bad enough when Farold beats him up in front of the villagers, but nothing prepares him for when Farold is found murdered. All accusing fingers point to Selwyn, who is promptly sealed in a burial cave with Farold’s corpse.

But they’re not alone in the cave. A witch appears with an offer of escape if Selwyn will be her servant. The witch brings Farold back from the dead in the form of a bat–too bad he doesn’t know who really killed him! There’s no choice left for Selwyn except to join forces with his worst enemy, a dead man, to find the real murderer.