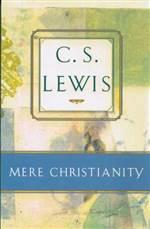 Mere Christianity is C.S. Lewis's forceful and accessible doctrine of Christian belief. First heard as informal radio broadcasts and then published as three separate books - The Case for Christianity, Christian Behavior, and Beyond Personality - Mere Christianity brings together what Lewis saw as the fundamental truths of the religion. Rejecting the boundaries that divide Christianity's many denominations, C.S. Lewis finds a common ground on which all those who have Christian faith can stand together, proving that "at the centre of each there is something, or a Someone, who against all divergences of belief, all differences of temperament, all memories of mutual persecution, speaks the same voice."