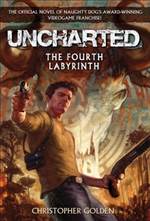 In the ancient world there was a myth about a king, a treasure, and a hellish labyrinth. Now the doors to that hell are open once again.

Nathan Drake, treasure hunter and risk taker, has been called to New York City by the man who taught him everything about the “antiquities acquisition business.” Victor Sullivan needs Drake’s help. Sully’s old friend, a world-famous archaeologist, has just been found murdered in Manhattan. Dodging assassins, Drake, Sully, and the dead man’s daughter, Jada Hzujak, race from New York to underground excavations in Egypt and Greece. Their goal: to unravel an ancient myth of alchemy, look for three long-lost labyrinths, and find the astonishing discovery that got Jada’s father killed. It appears that a fourth labyrinth was built in another land and another culture—and within it lies a key to unmatched wealth and power. An army of terrifying lost warriors guards this underground maze. So does a monster. And what lies beyond—if Drake can live long enough to reach it—is both a treasure and a poison, a paradise and a hell.

Welcome to The Fourth Labyrinth.(