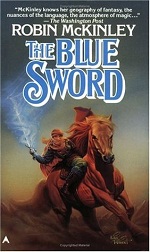 The Blue Sword is a fantasy novel written by Robin McKinley and published by the Berkley Publishing Group in 1982. The novel The Hero and the Crown serves as a prequel. The Blue Sword has received numerous awards, including: Newbery Honor Award, ALA Best Book for Young Adults and the ALA Notable Children's Book. The story, told in the third-person omniscient perspective, is of a young woman named Angharad Crewe, called Harry, who becomes a warrior in her adopted homeland of Damar.