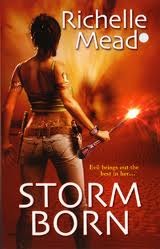 Storm Born is a supernatural, romance and fantasy novel written by American author Richelle Mead. It is the first in the Dark Swan series, followed by Thorn Queen and Iron Crowned. The fourth in the series Shadow Heir is set for publication January 2012. The series follows the main character Eugenie Markham, a "shaman-for-hire" and her encounters in the "Otherworld", a parallel world occupied by the "shining ones" and her adjustment to a prophecy stating her first-born son would be a powerful conqueror of both worlds.